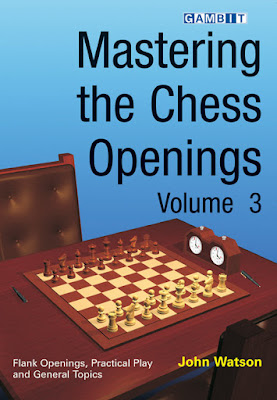 Mastering the Chess Openings
Volume 3
By IM John Watson
351 Pages
Gambit Publications
‘My objective with this work is to provide instruction and analysis ranging from that appropriate for a low-rated player with, say, one or two years’ experience, to a long-time player who is familiar with a good deal of theory.’

IM John Watson is a popular writer. His works on chess strategy and the French Defence are all highly regarded; indeed, no 1 e4 e6 player should consider their library complete without at least one edition of ‘Play the French’.

His series aimed at ‘Mastering Chess Openings’ was originally planned to cover two volumes but now it looks set to run to four books.

Long-term Watson readers should be delighted to see that this volume covers the English Opening. The author wrote a famous tetralogy on 1 c4 in the late 1970s/early 1980s. 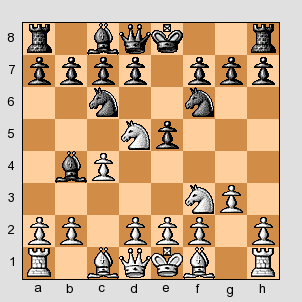 However, there is still a large amount of material with coverage of all the major variations of the English Opening, namely:

After 1 c4 e5, there’s an obvious point which leads to an interesting discussion on the merits of reversed openings.

‘So you might ask (and many players have done so) why anyone would subject themselves to playing against the Sicilian Defence with a tempo less?’

IM Watson provides plenty of detail regarding the pluses and minuses of such an approach. The extra tempo isn’t always useful.

Similarly, he takes another bull by the horns when he outlines the differences between White playing 1 c4 and 2 Nc3 and the trendy 1 c4 and 2 g3. The subtle differences may have passed most players by so it’s well reading his stock taking summary.

Reading IM Watson’s prose reveals one of his great writing strength; getting the reader to think, and often rethink, even for positions and variations in which one’s knowledge seemed complete. His works are never dry and always inspiring.

Sometimes the illustrative games end with a brief assessment but no mention is made of the eventual result; this looks a bit odd and could have been cured by a simple '1-0 (34)' typ of comment.

Those already familiar with the author’s writing style will feel at home; he is at his chatty best, talking directly to the reader (sample snippet: ‘…play should continue with 10...Qxc6, to which I’ll return in a minute’). He has the ability to sum up the salient points of even the trickiest variations in easy to follow prose.

For example, on this tricky pawn sacrifice: 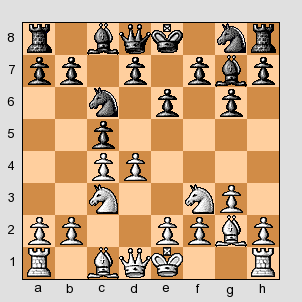 …he has this to say:

‘For many years this radical pawn offer was not taken seriously, partly because the expenditure of two tempi to place a bishop on g2 would not generally fit into a sacrificial theme. So, what is going on? Above all, White is trying to exploit the weak dark squares created by the move 5...e6, in particular d6 and f6. In what follows he will play either Nb5 or Ne4, attacking d6. In addition, 6 d4 frees his dark-squared bishop to rush into play by Bf4 or Bg5, hitting one of those weaknesses. Since Black’s c-pawn will end up on d4 (or gone), the potential manoeuvre b3 and Ba3 will strike at the d6-square and sometimes prevent castling (even Bb2 attacks down the long diagonal) and the advance c5 might add to White’s grip on d6’

Incidentally, the ‘dull’ tag often dumped on 1 c4 can be safely refuted once and for all. Dangerous and exciting lines are available for English players, just as they are for 1 e4 devotees.

Here’s a few of random examples, all nicely covered in the book: 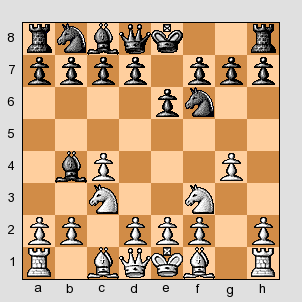 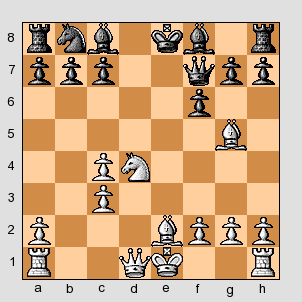 Black can have fun too: 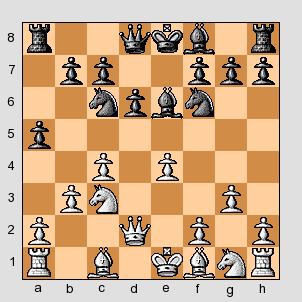 The extensive bibliography, covering nearly two full pages, clearly shows the depth of research.
There’s a very good index of variations, complete with way marking diagrams, which needs to be thorough for the English Opening due to the large number of early transpositions.

It would be great to see Watson let loose on a new version of his four-volume classic coverage of 1 c4, or at least a full and frank single volume repertoire book, in the style of his classic French Defence tomes.

Meanwhile, this fine overview will appeal to anyone looking to discover the inside story of a powerful and important opening. Those who already play the English will enjoy this new book too. Mastering an opening can take a long time; this book will provide a plethora of help and inspiration along the way.

In my opinion, this is the best volume in the series (so far).

Missed a review? Please visit my archive:http://marshtowers.blogspot.com/2007/12/chess-review-archive.html
Posted by Sean Marsh at 00:32

I was thinking of buying McDonald's new book "How to Play Against 1.e4." So if you do review this, would be kind enough to delve into his anti-anti-French lines (KIA, Exchange)a tad bit than would otherwise be the case. I'm not thrilled with the Fort Knox by the way. So another issue is whether the book gives short shrift to the McCutcheon in the name of giving wimpy lines like that one enough space.

Well, if you made it this far thanks very much for reading. I enjoy your blog and visit it weekly.

I'm expecting McDonald's book to land at Marsh Towers any time now and I'll certainly take a good look at the lines you are interested in.